It doesn't happen all by itself

Tim Street, one of the eminent contributors and energetic proponents of the International 6 Metre has been updating the history of the class. He intends to send a manuscript to the publisher shortly, but asked me check a few things. This got me thinking about people, specifically people who have contributed over time to make this class what it is. What is the domino effect of positivity? While I think many miss the meaning of Robert Frost's 'The Road not Taken', the poem's message could be applied to the enthusiastic involvement of many people over the years and brings up many questions of, "what if..." What if Hans-Otto Giese had not seen Hanko II on Puget Sound? Would he have gone to Norway to purchase Oslo II in 1936? Had he not done that would there have eventually been more than 25 sixes in the Pacific Northwest? What if Bill Pain and Lou Kershaw had not started a Long Island Sound 6 Meter Association in the 60's? The result may have been loss of International status and no formation of ISMA. What if George Nichols had not commissioned the creation of Goose? Would someone else have done it. The boat came late in the cycle of the 30's - almost the last boat built before the global conflict of WWII. Following Goose there was a 10 year gap in North America until the next boat was built, and it was the all-conquering Llanoria. OK. Enough for now. Herewith, an amusing account of the 1967 North Americans on Bellingham Bay at one of the heights of interest and enthusiasm in the Pacific Northwest.


NORTH AMERICAN SIX METER CHAMPION SHIP 1967
by  Hans-Otto Giese
For the fifth time this regatta was held in our Northwest waters, and   for the second time in Bellingham Bay where we first held it in 1955 with 15 entries. Since our Maybe VII had won the Globe & Mail Trophy, emblematic of the championship, last time in Tacoma in 1964, with 3 firsts yet, her skipper had the right to select this year’s site and he did not hesitate to choose Bellingham, where the races were then held under the joint sponsorship of Seattle Corinthian Yacht Club (CYC) and Bellingham Yacht Club, again during the week preceding Labor Day, beginning Sunday, August 27, 1967.
Great care was taken to make this a really good regatta, particularly since we now have 18 sixes on Puget Sound and 7 more in British Columbia. They include practically all the “name boats” of the world, from the twenties to the present, which are still in racing commission. We actually had 22 starters, and it was a big and spectacular field of these superb yachts, all in perfect shape and very well sailed, indeed.
Brent Nichols as Regatta Chairman did all the ground work over the preceding half year with its many details. Dan Olson of BYC was again Race Chairman, and Carl Hostetter was chosen as Race & Regatta Judge. No better racing organization ever existed, everybody and everything worked.
The yachts arrived Saturday from all directions and by various means, including a tugboat and a number of mother-ships. BYC provided fine, individually assigned moorages along its main dock, as well as storage facilities. A measuring-bee found only 3 spinnakers and one genoa exceeding the complicated 6m formula and restrictions. Just a little cold war.
The  first start Sunday noon in a fresh SW breeze was  quite spectacular and hair-raising since a number of the well known and experienced bargers were pushed over the line, but only because they belatedly realized that the white flag marking the starting line was flown from the  stern of the committee boat lying  in the wind, and not from her bow. This  was actually  the only  flaw in the whole regatta, and there was then no more of such good, clean, wholesome fun because the sharp noses of these five-ton  racers scare even otherwise stoic race committee members and photographers into hasty evasive  action. However,  there  was nary a bump. Skillful sailors indeed; by inches. And happy ones as manifested by the loud laughter in response to certain shouts of initially timid but righteous souls.
We sailed a triangular course once around, and then windward-leeward, with a short windward leg back up to the starting line, not quite 12 miles. The windward mark was a bell buoy off Post Point, where the flood tide made things interesting and created ever changing tactical situations while tacking up the shore. Then came a run down into the bay, and a reach towards town. It was a fine first race and presented a most beautiful sight. As usual Maybe won, Eros (SYC) was second, Goose (CYC) third. Buzzy III of Maple Bay fourth and Exit (CYC) fifth. The previous North American Champions, Saga, Alarm and Buzzy II, lagged a bit behind these more modern yachts.
The next day was calm and smoky from the forest fires. No wind in the morning, none at noon, and no breeze to speak of until some cats-paws about 4 o’clock indicated a Westerly. So all boats went out into the bay, the officials on the Committee Boat (white flag at the bow!) sighted, measured, planted buoys, and conferred and conferred, and it looked like a race was possible, but it pooped after the preparatory gun, and all went home, praising Carl and his committee for their sensible decision, even though it could wreck the schedule. We drank their health, and watusied.
Then came Tuesday with a wonderful strong breeze to preserve Bellingham’s reputation, making not only two remaining individual races possible that day, but a first team race besides, as scheduled. Again on the windward leg up the shore, the lead and the position of these 22 racers changed constantly. One bad tack, and one could lose 10 boats immediately, and they were hard to catch again. Lessons were learned.  Even with the spinnakers there was much jockeying and some really wonderful and hard competition all over the bay. Buzzy III won this one, to everyone’s delight, Maybe was second, Eros third, Exit fourth and Lulu CYC fifth. The Champion was not deteriorating, but sailing conservatively, which was approvingly recognized by all. Nervousness reigned, however.
The last race was even more beautiful. The starting line was perfect again, and it made no difference where one started, but no port-tackers in this business. Exit ran completely away with this one, Buzzy II, now SYC, was second, and Maybe third – and thus again North American Six Meter champion, closely followed in the series by Exit, Eros, Buzzy III and Goose. In all three races there was only one protest and there were four voluntary withdrawals or technical fouls in the frequently very close racing. Sportsmanship was of the best. Here are the complete results: 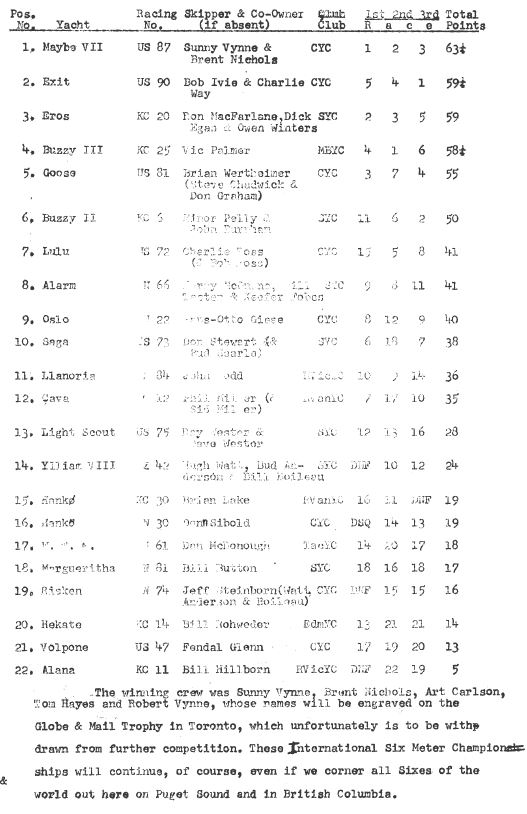 Posted by Matt Cockburn at 12:21 PM No comments:

Well, I'm pretty certain there was other media coverage of the Olympic regatta in the USA and other countries, but I'll guess none of the others were from a sailor's perspective. Ben Weston was a California boy sailing on Owen Churchill's 8 metre, "Babe", one of the "one design" eights designed by Starling Burgess and built in Germany at Abeking & Rasmussen. The scoring system is discussed, and appears to be something like a modified Gold Cup format. To win the regatta (and the Gold medal) you had to have the most first place wins and practically nothing else mattered. The sixes appear to have had a rough time. Looks like it was more of a NASCAR race than a regatta. Johan Anker, with Crown Prince Olav as crew, won the Gold medal for Norway. The USA entry, Herman Whiton with 'Frieda', a 1927 Clinton Crane design, sailed here in the first of his 3 Olympic 6 metre regattas; 1928 (5th), 1948 (Gold), 1952 (Gold). 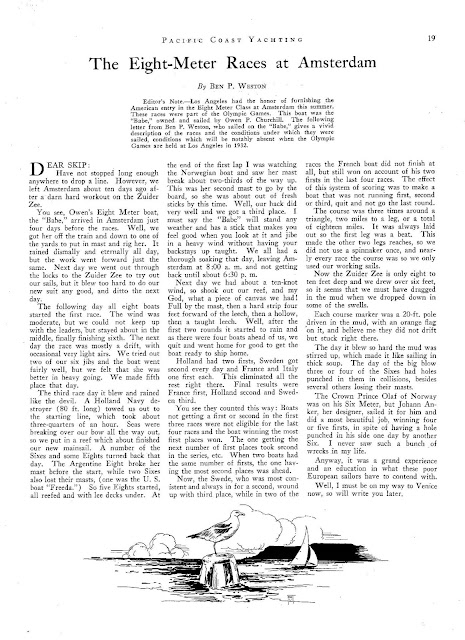 Posted by Matt Cockburn at 4:08 PM No comments:

Following the March races little was reported on the burgeoning 6 metre phenomenon on the West Coast, other than a little build up for The Southern California Regatta at Long Beach. Over 175 yachts, both power and sail, participated in this festival of speed. The inside harbor was used for the powerboats, Limited and Unlimited, inboard and outboard; see the first photo below of the fantastic Unlimited hydroplane, "Miss Los Angeles" (16 cylinder motor, 800 H.P., 75 MPH) and other boats. Note large sailing ships in the background.

Further below I have scanned in the breathless account of the 6 metre races, written by H.B. Warren, with Ray Chapin photos. The racing for the sail boats took place between August 6 - 10, 1928. 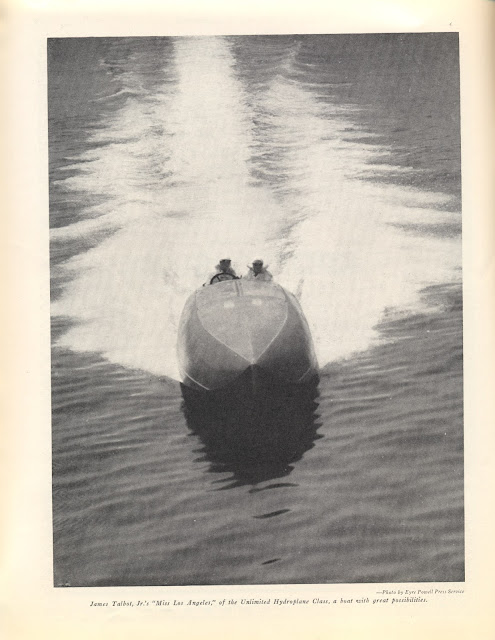 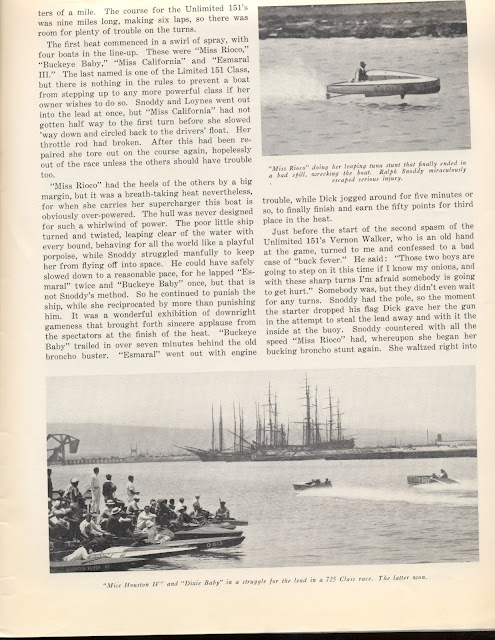 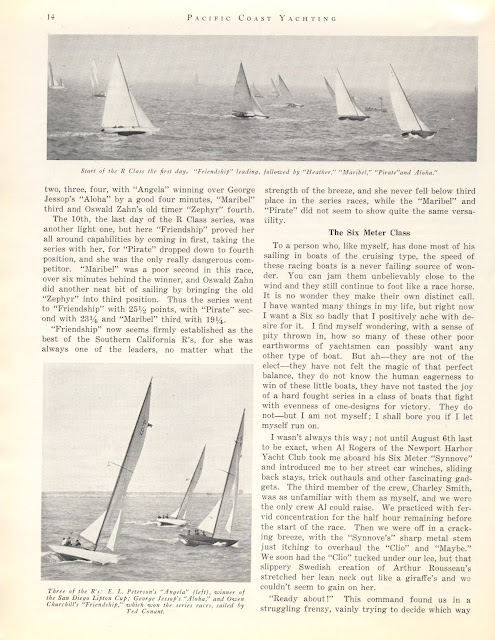 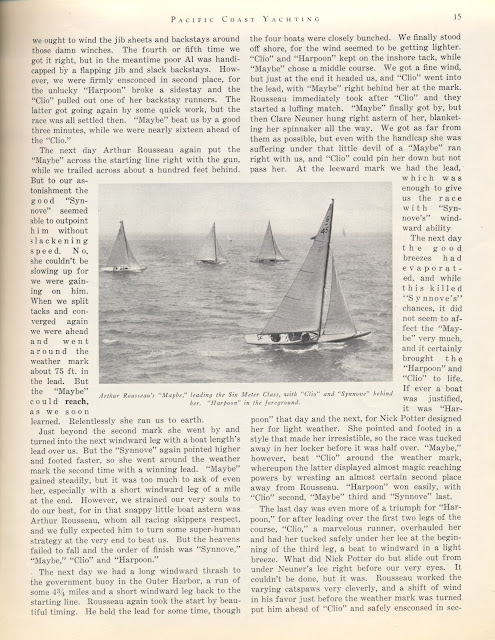 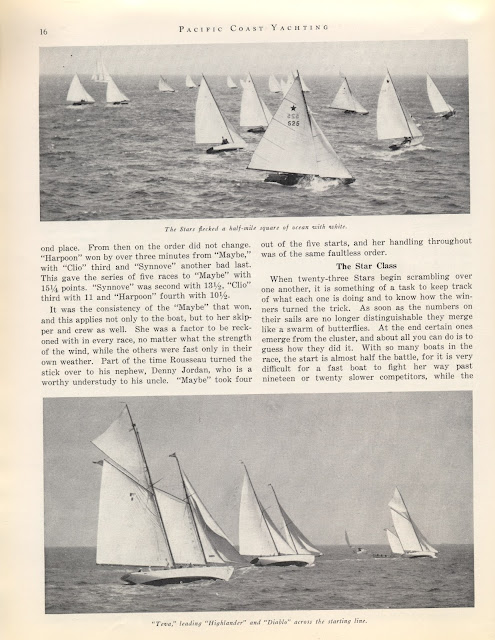 Posted by Matt Cockburn at 12:34 PM No comments:

Here we have a different voice proclaiming the same news about the East Coast wipeout of the California yachting establishment. 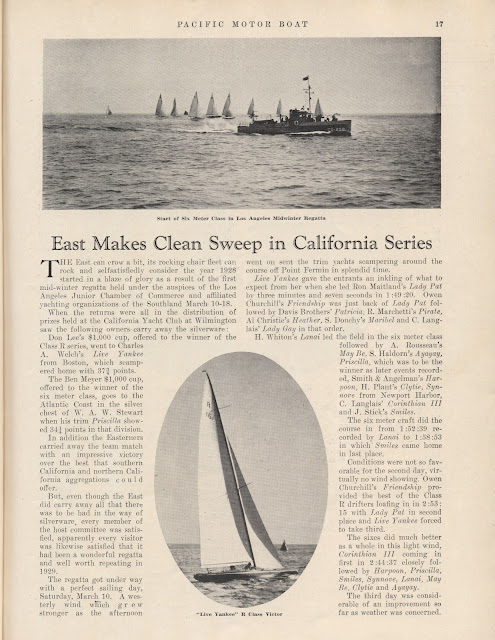 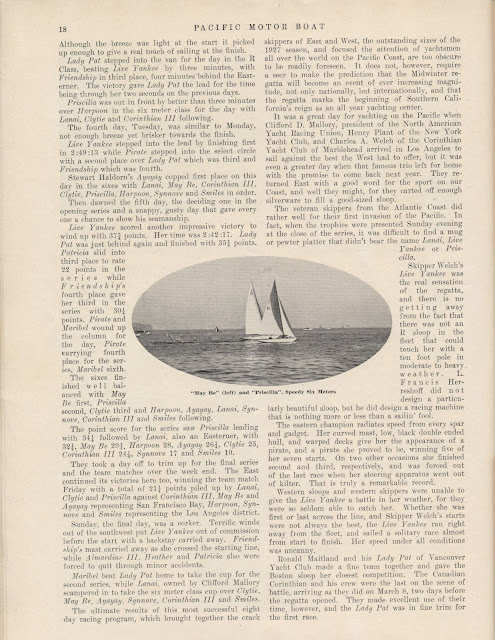 Posted by Matt Cockburn at 3:40 PM No comments: 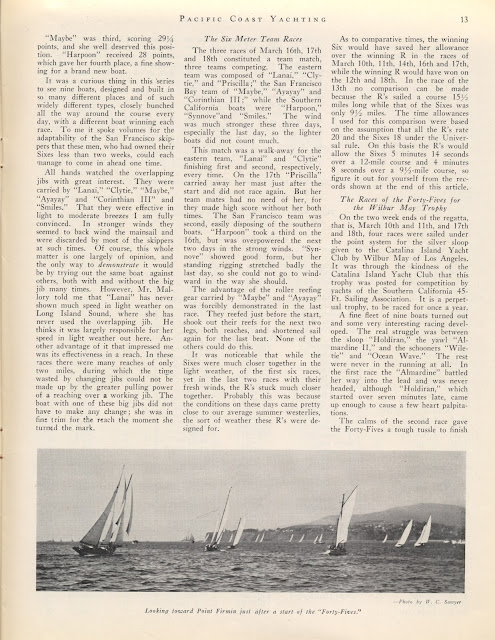 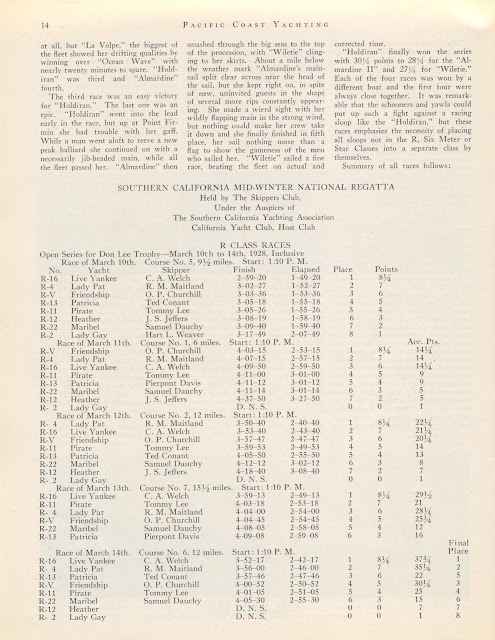 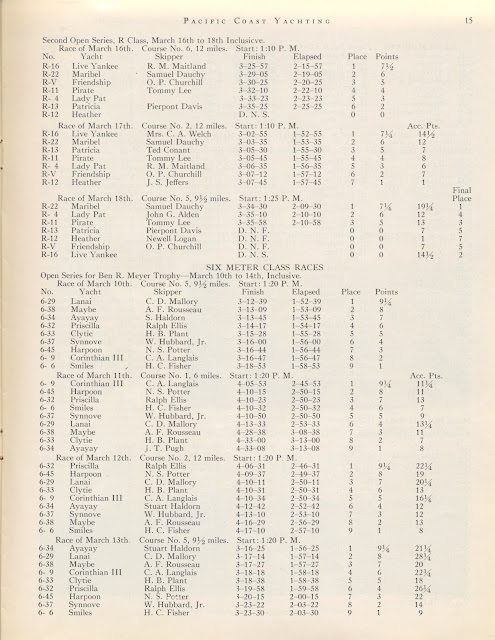 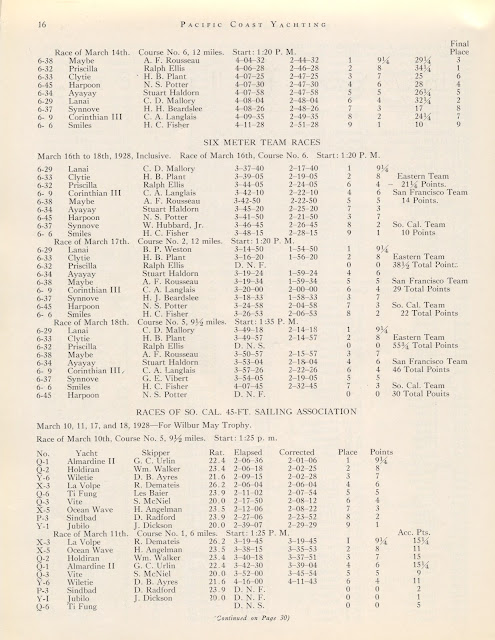 Posted by Matt Cockburn at 3:35 PM No comments: 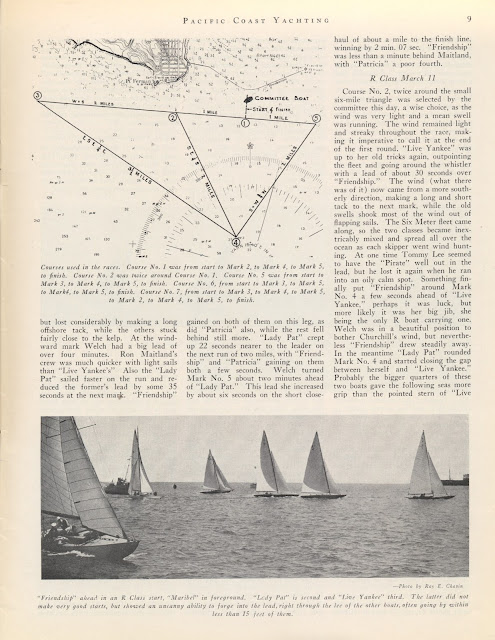 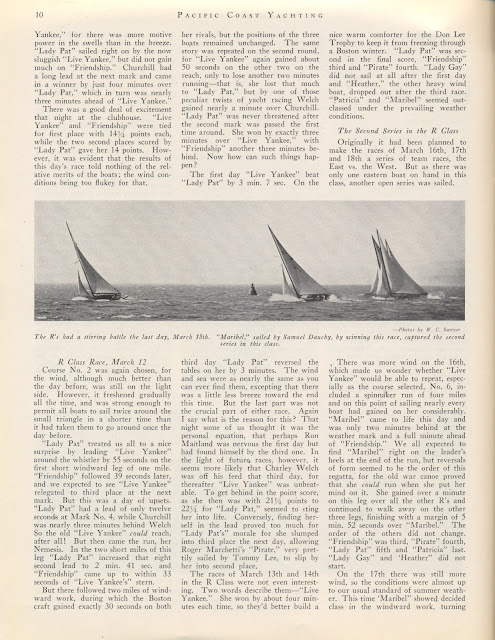 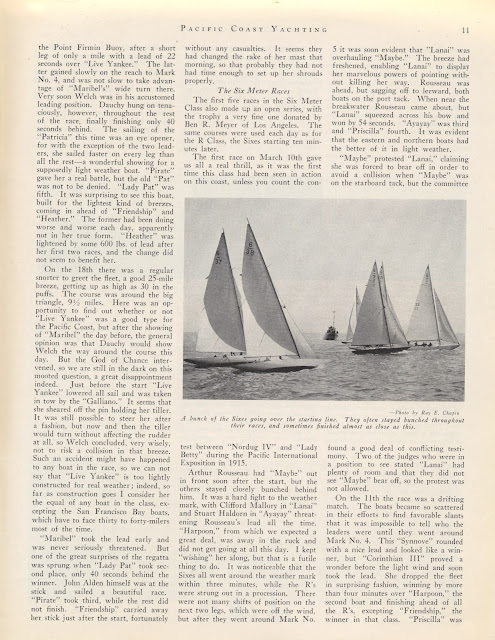 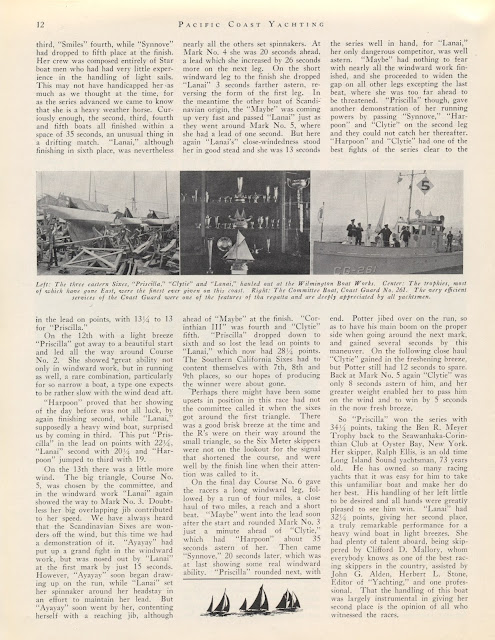 Posted by Matt Cockburn at 3:33 PM No comments:

O.K. 6 meter history and trivia geeks, here we go with an article that probably only exists in a few libraries on the West Coast. As you will read, the inimitable US 29 'Lanai', one of Clinton Crane's masterworks, dominates the racing and leads the charge for the East Coast, the sailors of which drag home a veritable Comstock Lode of silver. I'll be spare in my commentary and simply post the articles that appeared in the aftermath. I'm certain there was other coverage in The Rudder and perhaps Yachting, but I don't have those magazines, so Pacific Coast Yachting and Pacific Motor Boat will be our last words on the subject. 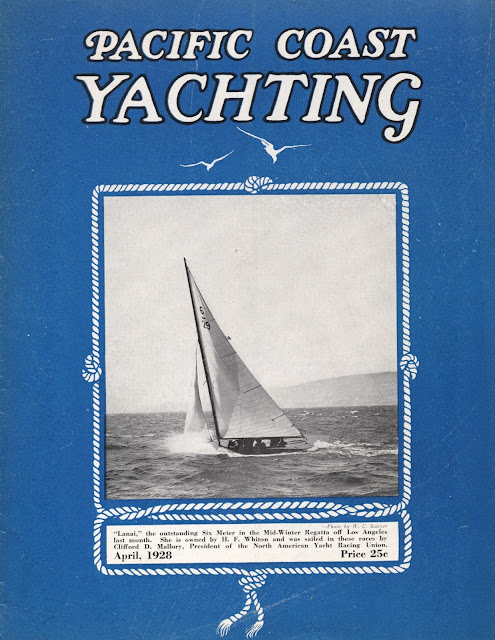 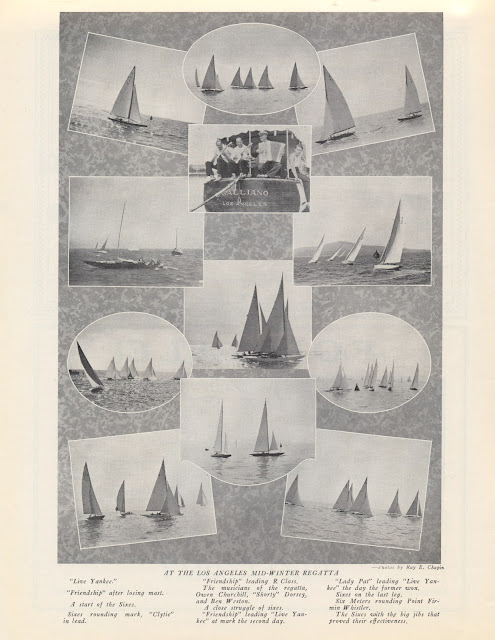 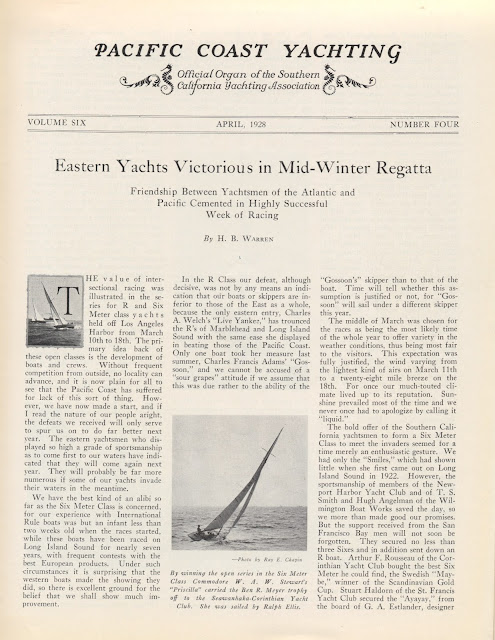 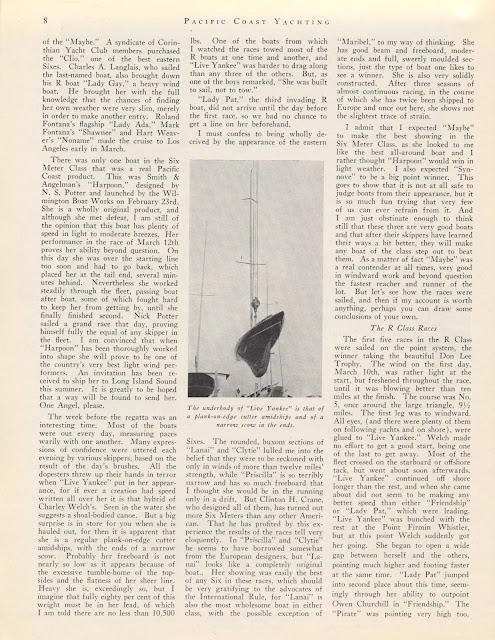 Posted by Matt Cockburn at 3:27 PM No comments: